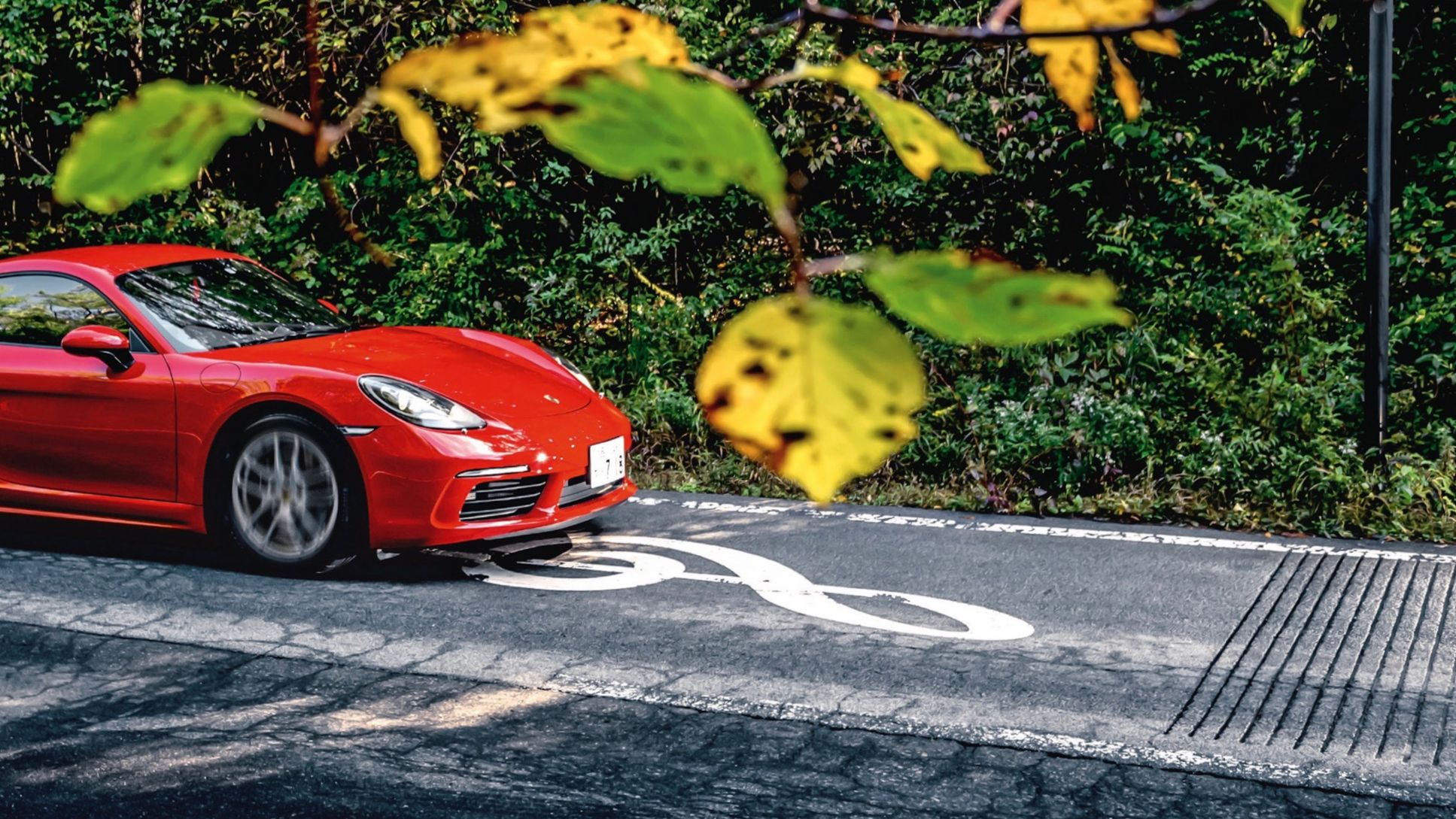 A Road That Plays Music?

From north to south and east to west, Japan it’s a land of bustling cities, ancient temples, stunning scenery, tiny houses, narrow streets, restricted spaces, factories, office blocks, and concrete buildings in every direction you look. The wonders of Japan are closer than you think, which is not the only view that can be discovered.

Starting with the private railway lines (shitetsu), buses, private cars, and ending with bullet train (shinkansen), the transport network in Japan is very comprehensive. It provides access to all corners of the country, including many remote mountain areas and islands. With so many choices, it’s never been easier to visit and discover Japan, but exploring the land of sunrise by car can be uniquely rewarding. Beyond the ability to soak in the picturesque vistas on your own time, there are other experiences to be had. Regardless of whether you’re a passenger or a driver, be prepared for some random encounters — some exclusively Japanese.

Over the years, there have been many innovations in road construction and design, but the fact that road engineers can cut lines into the asphalt, so when a car drives over the lines, a musical tune can be heard – it’s the standout. Usually, these unique roads are on a section of road in a regional or remote area that drives on causes a tactile vibration and audible rumbling that can be felt through the wheels and heard inside the car and echoing around the surrounding area.

How Do Melody Roads Create Tunes?

Initially, inputting music into road surfaces was discovered in the 1950s using parallel grooves in the road. The tracks on the road were just a few millimeters deep. It wasn’t until 1995 that Danish artists Steen Krarup Jensen and Jakob Freud-Magnus invented the ‘Asphaltophone’ that transformed musical roads using spaced-out raised pavement markers. 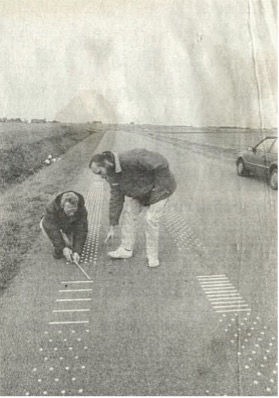 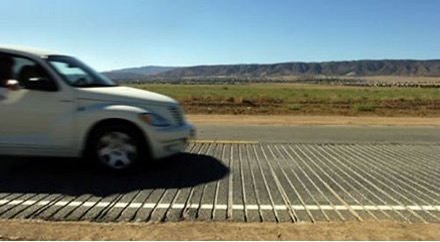 Grooves cut into the street to let the passing car vibrate and produce the melody. Image via Wikipedia

Between 250 to 500 meters in length, the series of furrows in the roads were constructed with carefully calculated depth and spacing(3mm-6mm of depth and 6mm-24mm width) to generate a rhythm and hum that is uncannily distinct and recognizable when car tires come into contact with them. This rumbling is heard within the car and the surrounding area in the form of a musical tune and was developed so that the melody’s speed would discourage speeding, and the sound would prevent drivers from falling asleep at the wheel.

The Musical Highways around the world

2019 was the year when Hungary had its first musical road in memory of the death of Vine, the lead singer of the band Republic at Road 67, and Indonesia installed a musical road along the Ngawi–Kertosono section of the Solo–Kertosono Toll Road in Java. The song played in the first six notes of “Happy Birthday to You” and was chosen because it is familiar to the community.

As 68% of traffic accidents in South Korea are caused by inattentive and sleeping drivers, in the city of Anyang, just south of Seoul- Singing Roads were designed to help drivers stay alert and awake. This small section of highway plays the children’s nursery rhyme “Mary Had a Little Lamb.”

The Lancaster route in California was the first musical road of its kind in the United States. Still, as in the Netherlands, due to the noise complaints from residents who lived alongside the original route, the musical roads were relocated to a more secluded area, and it still plays on today.

In Japan, engineer Shizuo Shinoda was the first creator of the musical route. Accidentally scraping some markings into a road with a bulldozer and droving over them, he realized that it was possible to create tunes depending on the depth and spacing of the grooves. According to many Japanese sources, in 2007, the Hokkaido National Industrial Research Institute refined Shinoda’s designs to create the Melody Road. They used the same concept of cutting grooves into the concrete at specific intervals and found the closer the tracks are, the higher the pitch of the sound, while grooves that are spaced farther apart create lower-pitched sounds.

Known as the “Asphaltophone” in Denmark and the “Singing Highways” in the Netherlands, these are not something unique to Japan, but it’s here that you can find them in abundance. From Hokkaido to Okinawa, around 30 Melody Roads across Japan played various tunes from Japanese cultures, such as “Futami Jowa” in Okinawa, “Spirited Away” in Gunma, “Evangelion” in Hakone, and “My Neighbor Totoro” in Hiroshima.  Mainly found in the countryside, these unique roads act as a tourist attraction and as a road safety device because to hear the song correctly, you have to travel at the signposted speed (between 40Km/ to 60km/h). The authorities feel they also serve the purpose of speed control and prevent dozing off at the wheel. The Melody Roads are highlighted by colored musical notes painted onto the road and road signs so you can prepare for the 30 seconds of music. 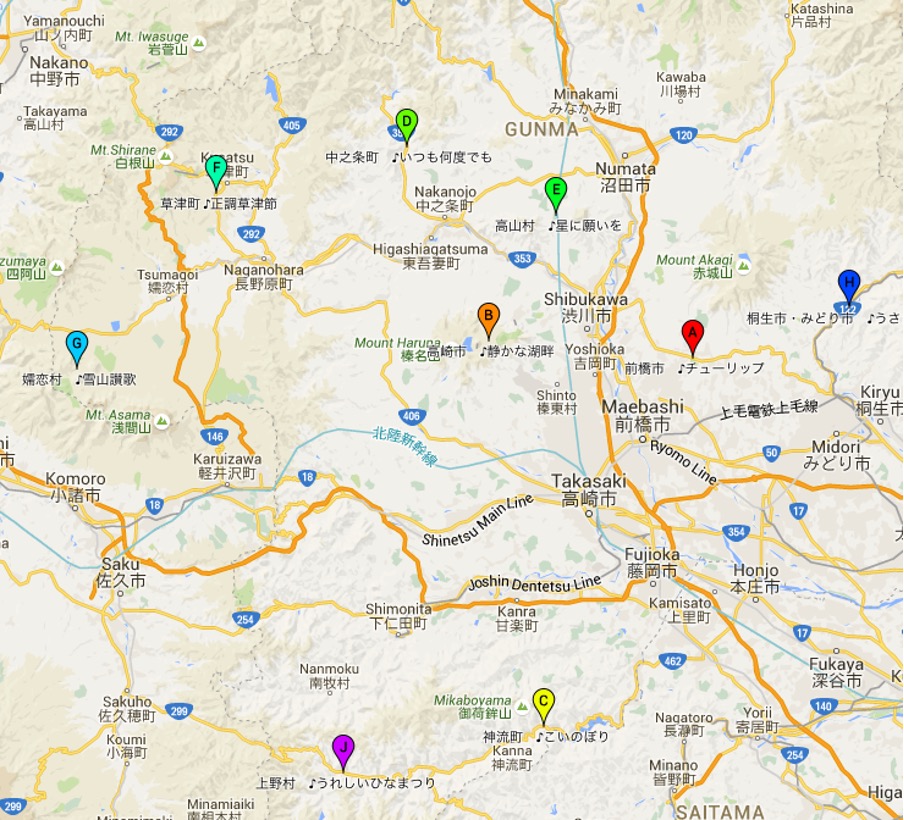 As of 2016, there are over 30 Melody Roads sections throughout Japan. Here is some famous melody road around Japan:
“Shiretoko Love Song”, Hokkaido in Shibetsu, Nemuro, on the site of where Shinoda’s first bulldozer scrapings were
“Miagete goran yoru no hoshi wo” by Kyu Sakamoto, in the town of Kimino in Wakayama Prefecture.
“Country Roads,” Route 252, Onuma-gun, Fukushima
“Tulip no Hana,” Route 353, Maebashi-shi, Gunma
“Natsu no Omaide,” Route 352, Uonuma-shi, Niigata
“Fuji no Yama,” Fuji Subaru Road, Minamitsuru-gun, Yamanashi
“Scarborough Fair,” Chino City, Nagano
“Fuji no Yama”, a traditional song about Mount Fuji, in Shizuoka Prefecture on the ascending drive to Mount Fuji
“Memories of Summer,” in the village of Katashina in Gunma
“A Cruel Angel’s Thesis,” the theme song from the anime Neon Genesis Evangelion, Ashinoko Skyline in Hakone, when driven over at 40 km/hr.

Route 353 on the way from Nakanojo Town, Gunma Prefecture to Shiman Onsen plays “Always With Me.” 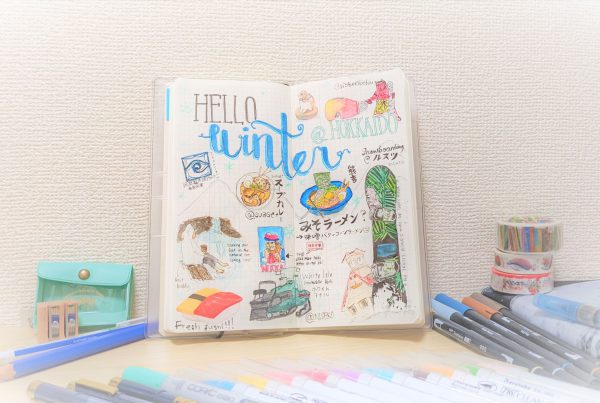